When real life connections are lost to virtual connections, social isolation and loneliness can happen. This program looks at the reasons why so many young people feel that “no one really knows them well.” Experts weigh in on the true toll of social isolation and loneliness, including physical, emotional, and mental health issues. Teens and experts discuss specific steps teens can take to reconnect with others. The program ends with the young people profiled talking about how their experiences in combating loneliness improved their lives by building self-esteem, lowering rates of anxiety and depression, and creating a happier, more optimistic outlook.

The program opens with a montage of young people describing feeling lonely or left out. Then viewers meet two psychologists, Dr. Chris St. Germain and Dr. Joanna Robin. “Loneliness is a feeling…that is often referred to as social pain,” says Dr. St. Germain, adding that loneliness means someone wants social interaction, even if he or she is surrounded by people. We learn that teens are reporting higher levels of loneliness than ever before—and that teens are the demographic that is most likely to feel lonely.

The program introduces another psychologist, Dr. Chioma Ajoku, who describes the reasons why the teen years can be lonely. “For starters, during your teen years your brain is still developing,” she notes, pointing out that teens don’t yet have the fully mature emotional skills they might need to cope with lonely feelings. Teens are also navigating major life changes at the same time they’re gaining more independence, which can increase the intensity of isolation.

Dr. Robin adds that teens spend a lot more time connecting to each other through social media now. “In the past, teenagers may have spent more time face to face, and in person,” she says. Indeed, a Pew Research Foundation study found that 25 percent of teens said they preferred to spend time alone on their smartphones instead of with friends.

“I find it easier to be on my phone, or at home by myself, rather than be out with friends,” says one young adult, Jenna. Marissa, another teen, says, “There’s less effort, you don’t have to get dressed up, you don’t have to drive somewhere.” Brooke adds, “If you’re at home, there’s not really anything to stress about. Going out, you have to worry a lot more about people and what they think of you, and fitting in.”

Dr. St. Germain then explains that social anxiety comes from the fear of being judged by others. People who suffer from it often avoid social interactions for fear of rejection, ridicule, or
embarrassment. Dr. Robin mentions a university study that suggests the same parts of the brain that are activated by physical pain are also activated by social rejection, which could explain why some young people choose isolation instead of the risk of rejection. “For some people, that can actually offer us a bit of relief,” says Dr. St. Germain. “But ultimately, it has a rebound effect, and the more and more we find ourselves isolating, the worse and worse our depression and feelings of loneliness can become.”

Dr. Robin notes that some teens naturally like to spend a lot of time alone, but others may desire more connection with others but have difficulty joining a community. Jenna shares that her loneliness worsened when she moved to a new town. “I didn’t want to build friendships, and it was really tough,” she says. “I didn’t know a single person.” Brenyn says he feels lonely even though he goes to a big high school, and Marissa talks about her nervousness about going to college and meeting new people.

The experts describe more circumstances that can lead to loneliness. “For adolescents and teens, summertime is one of the loneliest times,” says Dr. St. Germain. Dr. Ajoku adds, “Moving. Study abroads. Starting new schools…the loss of a loved one. Loss of romantic relationships can definitely lead to loneliness.” Dr. St. Germain says that transitions, such as parents getting divorced or changing schools, can also play a role: “You’re moving your entire life to a new social context, and that can also be very isolating.”

The program then turns to social media. Jenna says, “A lot of times I would rather stay at home, in my room, on my phone, rather than go out with people I know,” because she can better control
her environment and what she says. Dr. Ajoku notes that social media cannot be a replacement for real-life interactions because “it has this paradoxical effect of increasing their loneliness because they’re not able to have those face-to-face interactions and benefit from people’s tone, even things like touch.”

Social media can be beneficial, too. Dr. Robin explains that socializing online can help teens who live in small towns find others with similar interests. “Some LBGTQIA youth feel rejected by their families or close communities,” adds Dr. St. Germain. “Others feel like they’re just alone. There’s nobody else who can identify with their LBGTQIA identity.”

“When I use social media and see my friends posting things that I was not included in, it does make me feel a little left out,” says Marissa, and several others echo her worries. “Another thing that occurs with intense social media use is FOMO, fear of missing out,” says Dr. Ajoku. Before social media, teens didn’t always know that others were hanging out without them. “But now, when teens are hanging out, they’re recording things that are happening in real time. Then another youth is at home on their Instagram feed or on Facebook or on Snapchat, seeing their peers having fun without them. That can lead to feelings of inadequacy or social isolation.” 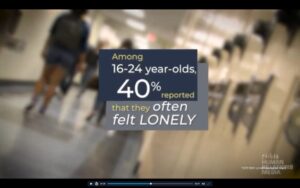 Next, the program moves on to the effects of loneliness. Teens describe feeling depressed, not being able to sleep or sleeping too much, and disordered eating. Dr. Robin says that chronic loneliness can lead to more isolation, depression, and even suicide. “Research has found that chronic loneliness can lead to disrupted sleep,” she says. “It can also lead to cardiovascular issues. It can lead to difficulties fighting viruses and increased inflammation.” Some of the young people then share that loneliness has affected their fitness goals, sleep, and ability to focus. Experts add more risks of isolation to the list: substance abuse, risky sexual behaviors, self- harming, and even suicide, noting that the suicide rate for people ages 10 to 24 has increased 57.4 percent between 2007 and 2018.

The young people then discuss how common feelings of loneliness are. “I feel like there’s nobody who does not feel lonely,” says Brenyn. “More people than you know struggle with social anxiety,” adds Brooke. The experts point out that loneliness is a feeling that can change, and that certain strategies can help. “The first part is figuring out why you feel lonely,” says Dr. Robin. Dr. St.
Germain adds that sometimes feelings of loneliness can come from hanging out with the wrong crowd, and working to surround yourself with supportive people can help. “Focus on developing the quality of one’s relationships,” says Dr. Ajoku. “Seeking out individuals with similar interests or similar ideas can really go a long way toward combating loneliness.”

Next, viewers learn about the importance of finding support systems. Brooke remembers that she felt nervous to ask for help, but that when she did, her parents immediately helped her find a therapist. Gage shares that he turns to his twin sister for support. The experts advise teens to volunteer in their community, adopt a pet, or exercise to help with isolation.

“It’s okay to feel lonely sometimes, and sometimes you just need to let yourself feel the emotions,” says Brooke. “‘I’m going to give myself a day to just be in my room, to watch movies and be alone.’ But tomorrow if I don’t feel better, I’ll schedule something with a friend.” Finally, Dr. St. Germain reassures viewers that nobody has to feel lonely forever. “But sometimes in order to make that change, we need to reach out for help and support,” he shares, pointing young people to friends, family members, school counselors, social workers, psychologists, hotlines, and text lines. “No matter how you choose to get help, just know that it’s there for you.”